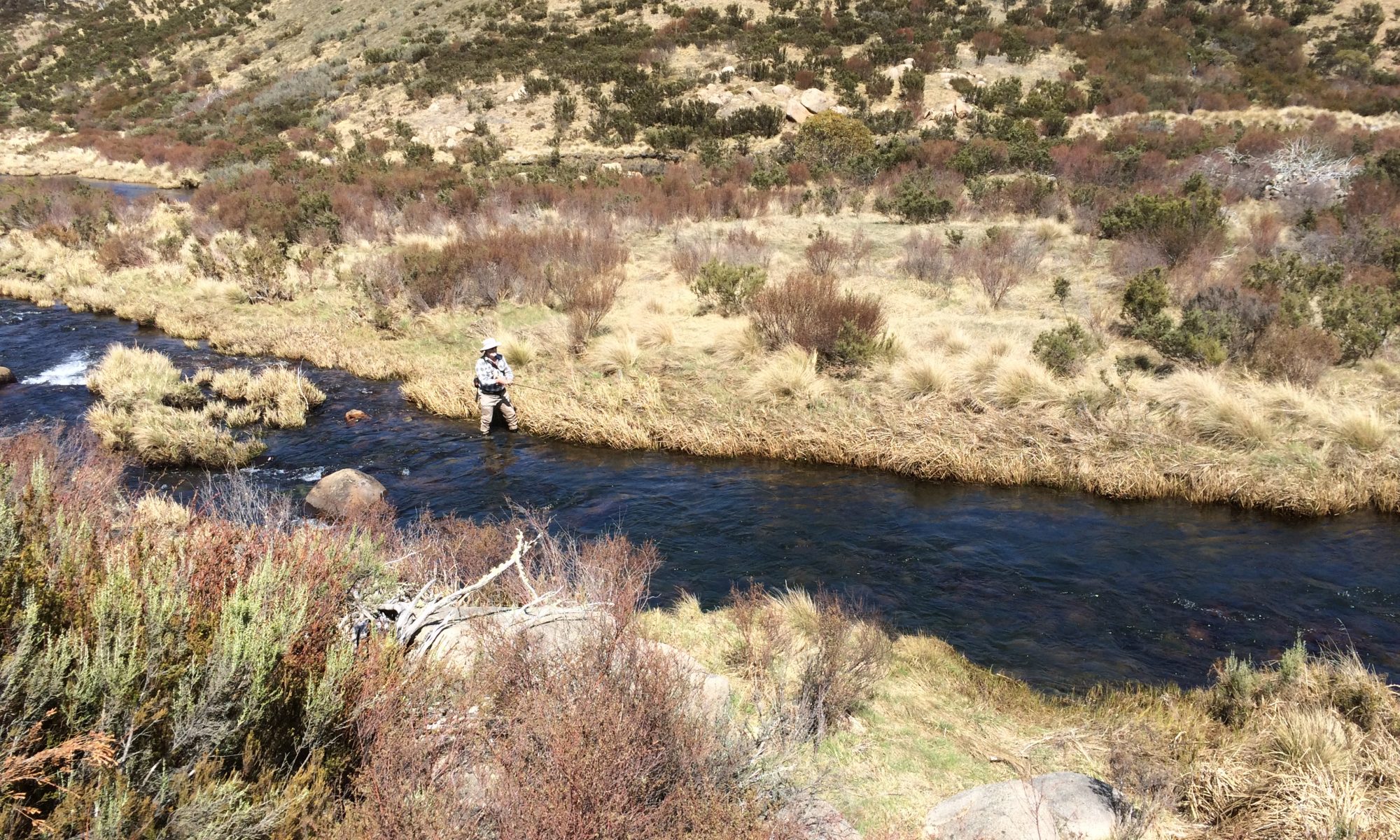 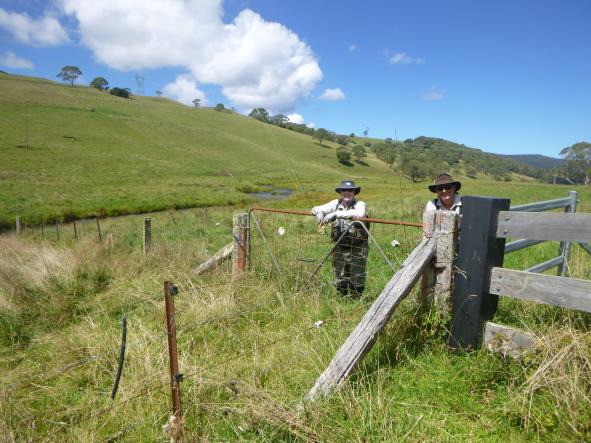 After a BIG breakfast at Raymond Terrace and lunch at Bellingen members of Lakeside and Woolly Buggers Fly Fishing Clubs arrived at Ebor in the New England National park.  We had National Park accommodation in The Residence, with ample room, air-con plus outside fire pit and bbq in a very pleasant bushland setting.

We had tea at the Ebor Pub, which was the right price and quite tasty. Warren had crumbed fish because he likes anything crumbed. I suggested crumbed greens, but he declined, preferring smokes and Pepsi max.

Next morning at gentleman’s hour (timed for the morning rise ) we set out for Coutts water, where the group had success last year.

We stationed ourselves on various sections of this pleasant stream, which was running fairly clear, anticipating a big catch.

My day got off to a poor start by slipping down the bank head first into cool water.  My clothes eventually dried out but my waders and booties stayed wet all day. Fortunately things improved and I caught some reasonable size browns and rainbow trout to brighten my dampened spirits.

Tuesday was our Murray Cod excursion, after getting the good oil from the Manager of Dutton Hatchery we headed on a long journey to the Severn river west of Glen Innes.

We fished the stream pictured above but there was no sign of anything. Heading further west ending at Pindari dam after a lot of dust and dirt roads, I guess I got what I deserved wanting to look for cod – a flat tyre.

Thanks to all the group for their help, especially Keith, I managed to continue the holiday with no spare, thankfully getting home okay.

Back to the trout around Ebor, the fishing got harder, but we had great meals, bacon and eggs breakfasts followed by steak and veg dinners plus plenty of beer, wine and spirits to help to fortify our fishing excursions.

To be honest the others were far keener than me, fishing well after dark, with some rewards.

Thanks for the great company fishos, an excellent holiday, well organised Alex, hopefully a few more fish next time, not sure about chasing those Cod again. 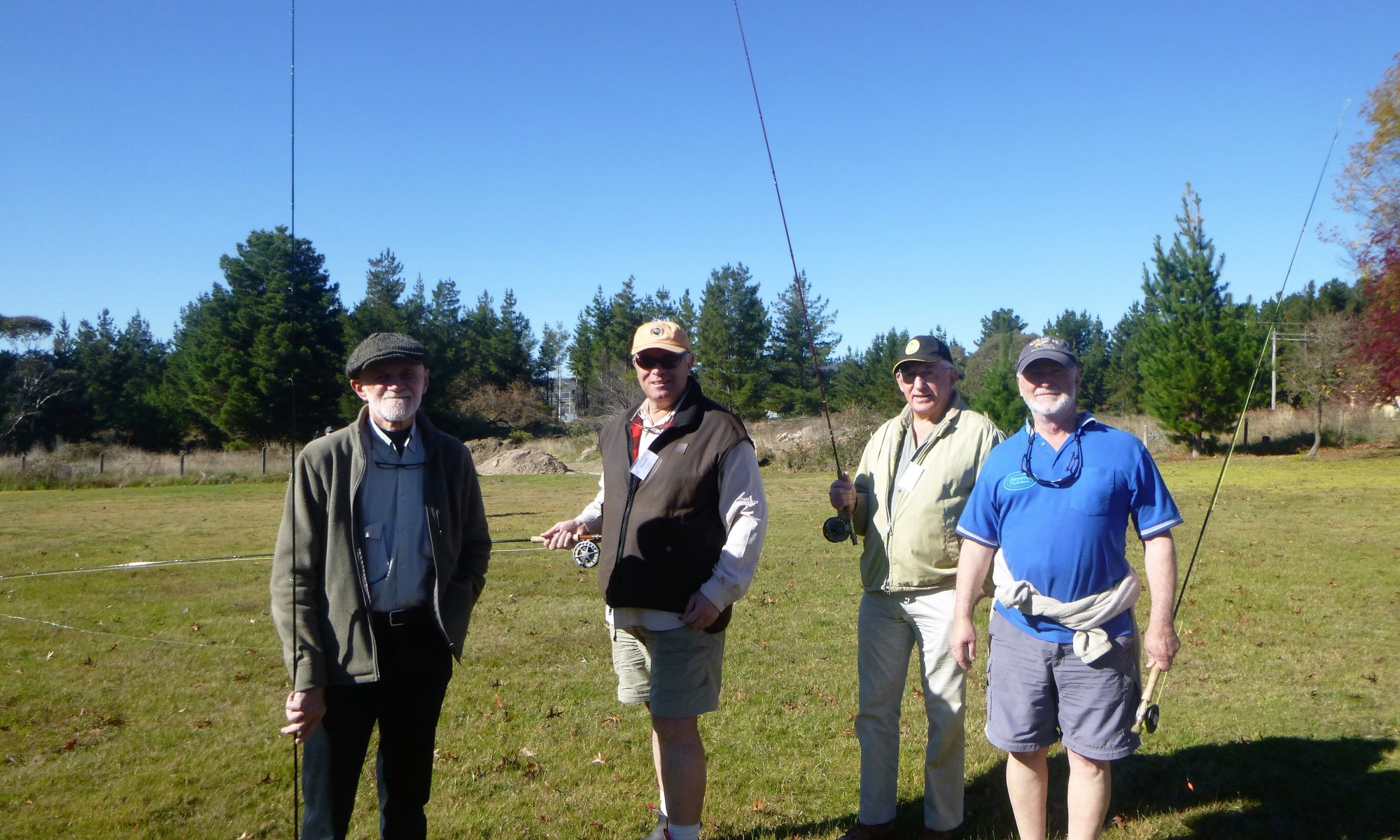 Fly fishing clubs converged at Wallerawang in May for the annual NSW Council of Freshwater Anglers (CFA) inter-club meet.

A super group of David Screen, Uncle Jim Screen, Bill Toorak and twin terrors Robert and Alan Steege represented Lakeside Fly Fishing Club (LFFC), pitting their skills against seven other fly fishing clubs. LFFC were confident with the local knowledge of Bill Toorak, our great advantage. But Bill earned himself the moniker of the PHANTOM over the weekend because he wasn’t sighted by his team members (busy with family commitments, Bill did fish on the Saturday and turn up with his catch sheet).

On the way up Alan and Rob fished the Coxs River off Mckanes Falls Road for a few hours but aside from spotting a five centimeter monster, they didn’t spook a fish. After a few drinks at the old pub in Wang they invaded Peter and Dot Drinkall at the BnB, providing a nice bottle of red consumed by all, then retired for the night.

When the fog cleared after breakfast the next morning, Alan and Rob fished the Coxs river just below the Dam wall on Peter’s property. They spotted two fish but couldn’t tempt them. So Peter took them through the nearby national park to another section of the Coxs. The nice clear water looked promising, and a few small rainbows were granted a ‘long range catch and release’ i.e. nothing landed. Still,  it was a great location and nice of Peter to take the lads down there.

On Friday night the official welcoming festivities were held at the Blackgold Motel in Wang and LFFC fraternised with members from other clubs, many of whom were familiar faces from club meets past.

The main day of competition dawned on Saturday bright and sunny. At least that’s how it was when Rob and Alan took to the water after most of the keen anglers had left.

Most fishos hit either Thompsons Creek Dam or the Fish river. David and Uncle Jim made for the Kowmung, a rather steep drive suited to David’s four wheel driving skills, and they both caught a few small rainbows.

Peter Drinkall let on that there were some good fish in the SECRET RIVER which also had a fair percentage of carp. The brothers Steege wrongly decided not to go to the SECRET RIVER and headed instead to the Duckmaloi where a farmer ordered them off his land, even though they gained access along the river bank.

So they checked out other stretches of river and this time they sought permission at the farm house. No one was home but points were earned for trying.

Despite low water levels a couple of decent rainbows were spotted in a deep run and Alan floated a dry right over the biggest fish’s nose, to no avail. The big fish then followed some streamers but ultimately refused.

Hedging their bets, the lads made for a proven spot on the Fish river and broke their ducks with a small rainbow each.

The clubs convened back at the Blackgold motel to share fishing stories around the barbeque. Most reported catches of small rainbows. The best fish caught was a 65 centimetre rainbow in, you guessed it, the SECRET RIVER. The largest impoundment fish was a 53 centimetre rainbow.

All the lads competed but trophies were elusive with LFFC finishing a respectable middle of the ladder. Neil Nelson from sister club Illawarra Fly Fishers snuck in some practise before hand and snagged the trophy. Well done Neil.

All up, Wang treated the LFFC lads to three days of excellent weather and good camaraderie. They’ll return next year determined to reclaim the inter-club trophy.

Skills night 2017 was great fun with Warren and Trevor sharing their fly tying skills, Don educating us on skagit lines and John showing off the slim beauty knot. At least that’s what it looked like but it was so slim and beautiful it was hard to see. Either that or it was too hard to see the monofilament. Next year John will be back tying the knot with something more visible.