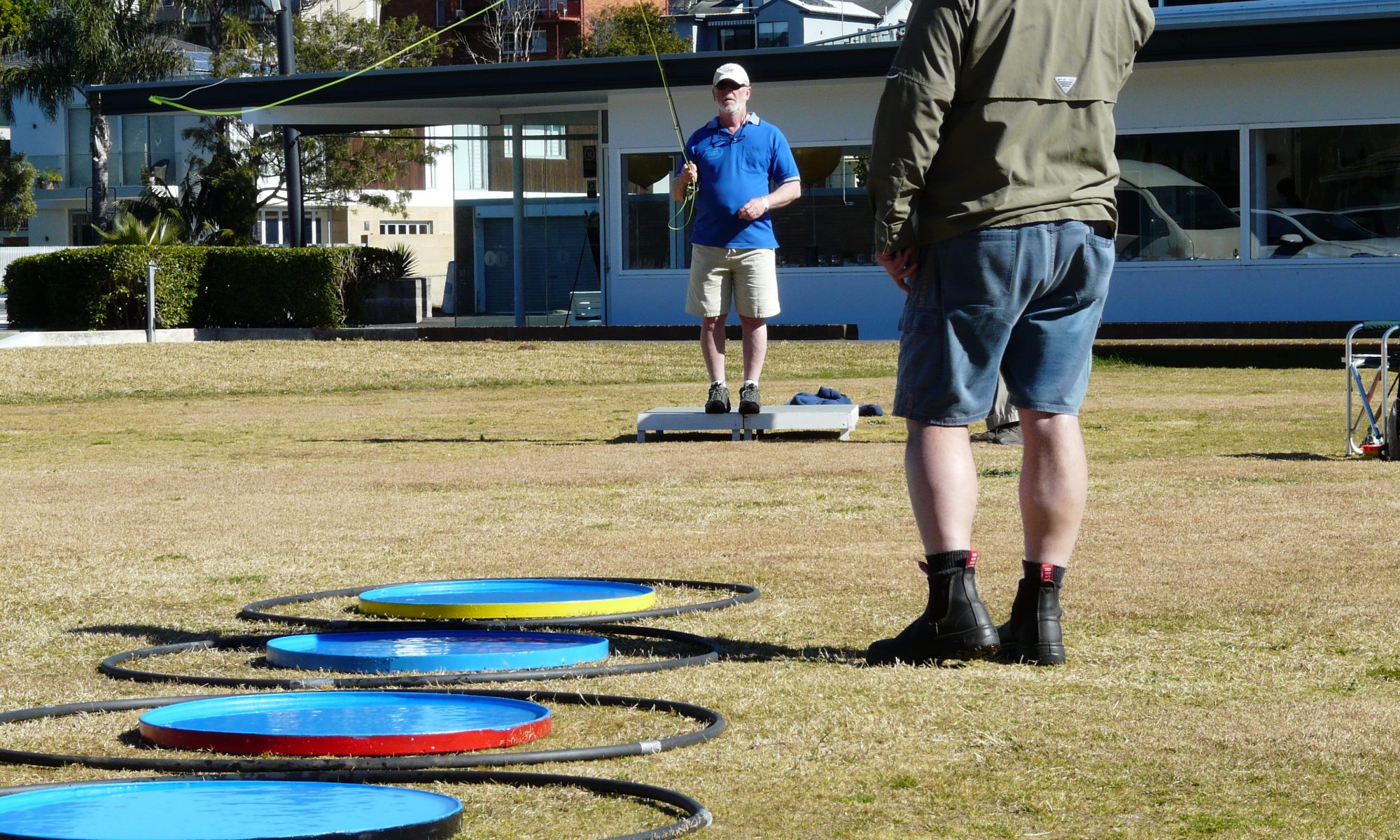 In a practical sense, the essence of good fly casting is the ability to consistently and accurately land your fly on the precise spot you intend it to go, not once, not twice, but five out of five times in succession. If you think that’s easy, just try it some time using a variety of distances.

Our club target casting results repeatedly reveal that many casters struggle with accuracy and some of them consistently miss many more times than they hit the intended target. This presents a handicap in a fishing sense such as casting to a sighted fish, or simply trying to land your fly in a spot that your eyes tell you is the perfect lie.

This is where our club target casting can help, it’s the ideal tool we can use to highlight faulty technique, and instigate remedial action. It can teach you to land your fly on the precise spot where your eyes are focused. Over the years I’ve noticed a pattern with many casters, as soon as they can manage to get their fly out there on to the water and subsequently succeed in catching a few fish, that’s good enough, any casting glitches become an accepted part of fly fishing.

This situation reminds me of an old saying, “you can lead a horse to water but you can’t make it drink”. Repeatedly we can extol the benefits of our club casting facilities, but casters have to want to improve their casting technique, it’s always up to them whether they are prepared to make the concerted effort required to modify their technique. The facilities are there for our members and skilled help is available, it’s just a matter of asking.

Rest assured, improved casting can only come from improved technique. Modifying old grooved in technique involves getting rid of old muscle memory and creating new muscle memory. There is no quick fix, and without regular monitoring we quickly revert back to old habits. One-off sessions don’t work, it has to be an on- going work in progress. Regular practice is essential, but it has to be the right kind of practice otherwise it’s counter productive.

This is where our regular casting days provide the ideal forum to allow us to monitor a caster’s progress. Our target scoring method provides us with a very simple yet effective method of measuring improvement and has the effect of inspiring confidence as casting scores increase, it’s the confirmation we need to hear. All casters scores can plateau from time to time and the only way to break this cycle is to fine tune technique.

Due to a long association with tournament fly casting, I’ve seen a great many casters in action, enabling me to watch countless fly line loops travelling backwards and forwards in the air. When I see a good fly caster, I see smooth narrow loops uniformly constructed in both directions without ripples and waves in the line. The leader rolls out straight and the fly does not re-coil back.

When I see a botched forward cast, it’s almost always due to what happened in the back cast. Whether we’re aiming at a target or a fish, it would be impractical and a total distraction to our focus to have to continually look back over our shoulder to see what the back cast is doing, so we must very much rely on a sense of timing and feel in managing it . The more line in the air, the longer it takes for the fly line to straighten, so our brain needs to adjust our timing accordingly, at the same time we feel for the load dragging the rod tip backwards. That is the signal to come forward. This fundamental simple casting process is so widely understood by casters everywhere and yet many still struggle to get the timing right.

It’s not that they can’t do it, it’s just that they don’t do it with consistency. Largely this is a lack of practice to groove in a rhythmical casting stroke to embed into the muscle memory bank. When we cast to a fish or target, we’re focused on where we want the fly to land, so we’re not thinking how to cast, it’s a memorised automatic process. If you have grooved in sound technique, you should consistently get a good outcome.

Starting the forward cast too soon

By far the most common fault of casters is a tendency to start the forward cast too soon before the leader has straightened out behind them. This robs the forward cast of power because some of the forward movement of the rod tip is used in pulling slack out of the fly line instead of loading the rod. This usually results in a wayward forward cast failing to roll out straight as line and leader collapse from lack of energy.

Casters should be able to recognise immediately if they come forward too soon as they will not be able to feel the full weight of the line. Contributing to this tendency of coming forward too soon, is the failure to impart sufficient power in the back cast, particularly as distance increases.

Many casters I see, can cast quite well up to a distance of 30 to 35 feet but are unreliable beyond that distance because there is insufficient power in their back cast to straighten it out before they come forward.

When casters struggle for distance, they further exacerbate the problem by reaching forward with their casting arm on presentation. This is like thrusting the butt section of the fly line forward instead of stopping it so that the energy imparted by the rod tip can be transferred along the line and leader in the roll out process. Thrusting the arm forward robs energy, so to avoid it, we need to make the presentation stroke finish with exactly the same chopping action as in each of the previous false casts. Don’t change the action on presentation.

Most serious casters have heard the expression, “the fly line goes where the tip of the rod goes”, it’s a bit like a trailer being towed, the trailer always follows the path of the towing vehicle. This means whatever path is described by the tip of the rod, the fly line will faithfully follow the same path. The significance of this is that if we want nice tight narrow loops, the tip of the rod needs to travel backwards and forwards in as near to a straight line as possible. This straight line path of the rod tip can be achieved by raising the elbow slightly for short distances and higher for longer distances. Many casters do not elevate the el-bow and consequently tend to get a rounded path of the rod tip and opens up the loop size significantly.

Allowing the rod to drift too far back beyond the vertical is one of the consequences of not raising the elbow. It causes a downward dip of the rod tip, which when coming forward needs to retrace its path curving up and over. Likewise, casters who don’t use a vertical casting stroke, but cast out to one side suffer the consequence of line and leader following a curved path to the target or fish.  Fly and leader have a tendency to flick to the left for right handers and to the right for left handers.

If you want accurate casting, it is best achieved with an overhead cast, which gives better focus of hand eye coordination following the line to the target.

If casters recognise any of these or other symptoms in their own casting, maybe a trip to any of our club casting days could be a simple solution to have someone else observe and help eliminate any troublesome issues. It’s worth remembering that the longer we reinforce bad technique the harder it is to modify it, the muscle memory keeps wanting to revert to old grooved in habits.